skip to main | skip to sidebar

Friday: of atlatls and tomahawks 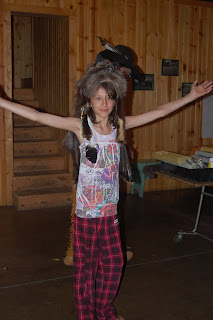 In which we get a sense of local history

I’ve always wanted to check out a local historic site in Jeffers, MN. The Jeffers Petroglyphs state historic site is about a half hour from here and as we were heading off to check out prehistoric MN a friend of my uncle’s arrived with his buckskins and old weapons, both native and settler. What an interesting morning.

In Jeffers we met Chuck, and archeologist anthropologist and incredibly pleasant geek, who showed us the carvings and explained that they range from 1500-9000 years old and that they are carvings from many different eras and regions. Chuck would fit right in with our family. Very cool. We spent the morning there and headed back to Shetek, which we were soon to learn means Pelican in the local language.

Herb was there to show us a bunch of really cool things and to teach us how to throw a tomahawk. As we did some atlatl assisted throwing at Jeffers, it was interesting to throw the tomahawk. 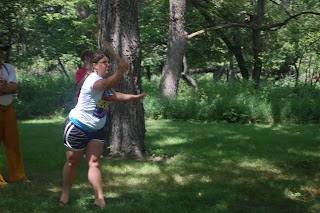 Highlights of Friday:
Herb and his buckskins
Ancient carvings
Atlatls
The boat taking kids “tubing”
The boat breaking down – and getting repaired! So disappointment turns to BIG fun.
Turkey and stuffing
Naps
Al talking to me about Drupal and getting me intrigued to look at it.
Posted by Kate T at 12:24 PM 1 comment:

Thursday: In which Jeff and John... 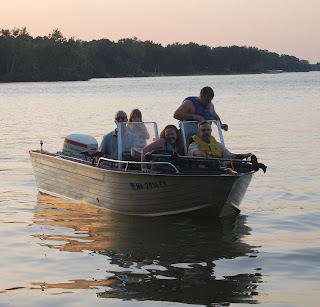 In which Jeff and John play a round of golf and a boat follows them home.

John (my brother-in-law) arrived in time for dinner Wednesday, and the pop-up trailer that he pulled from Illinois blew a tire in spectacular fashion just outside the camp. Spectacular. Peeled the tread off just like an orange. So, because he and Jeff (my cousin-in-law who had spent the night in the back of a pick-up truck under a mosquito net) felt the urge to play a round of golf they went to a nearby camper supply store to drop off the wheel. They got their round of golf in, and when they picked up the wheel found a boat for rent. So they rented this little lake runabout that hadn’t been started in two years.

Other features of Thursday:
Tim’s tire and bungee cord swings in the oak tree
An idea to repair the shower house.
The beginnings of the water slide
The arrival of the way too adorable little ones
Liz driving to Brookings to pick up Mom.
First campfire
Lemon garlic chicken and an invented dish of roasted turnips and mint.
Nick, Abby & Pirc arriving – and hitting a skunk with the car (stinky).
Sunset boating with the inevitable breakdown of the boat (two year old gas).
Posted by Kate T at 11:47 AM No comments:

In which we move into camp 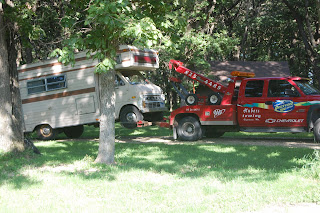 Moving into the camp – today we moved the food and supplies to the camp. It was, as always, a major military operation requiring two vehicles and a number of sorties some anticipated, some surprises.

Sam had packed Mom’s van with the stored supplies in her basement (dishtowels, pie irons, tents, chairs, giant coffee pots) and then reloaded the van with the food that we had purchased. We pulled out of her house and headed for Nick’s hamburgers.

Nick’s is a youth memory. We didn’t eat there all the time because although Spartan, Nick’s burgers as a per unit price are not inexpensive, but they were the first meal that I had in Brookings in 1964. They are small burgers, cooked in fat on a flattop, served as doubles and singles in soft, delicious buns that are not the typical hamburger bun but more of a yeasty dinner roll. Getting a double with cheese and everything means that you get catsup (not ketchup), onions, mustard relish. Your burger might have a toothpick through it to hold it together. No fries, chips. And if we sat at the counter we always had a chocolate milk poured from one of those food service stainless steel dispensers into a wavy glass. To- go burgers always are presented in a white bag with the order written on the side of the bag. I had two doubles with cheese with everything. This digression took a little bit of time, but we had a great lunch and made it to Camp Shetek only 15 minutes later than our appointed time.

Phone service is spotty, but we got all got a voicemail from Al – the RV that they rented from someone on Craig’s List (who wanted to sell it for $1000 and Wendy convinced them to rent it for $200.) broke down. They were waiting for AAA to come and tow them in. Liz went off to the rescue and Sam took Mom’s van off to Marshall to pick up the rest of the stuff in storage.

Everyone arrived at once. Liz was called off the rescue as AAA had arrived. She returned followed closely by Al and Wendy pulled by a tow truck and Tim in the troop carrier full of people and cases of produce.

Provisions 95% here, we made pizza and salad and the party started.
Posted by Kate T at 11:10 AM No comments:

In which we hunt and gather for the big shindig 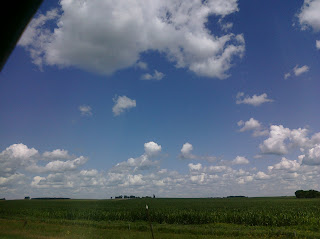 My sister and I went to Sioux Falls today to provision for the family reunion. We filled two flatbeds at Sam's Club and totally entertained all the folks (both employees and shoppers) at the check out. We only purchased a small amount of produce. Highlights:
30#s of pork loin
18 loaves of bread, 8 dozen sausage rolls, 8 dozen dinner rolls
8#s of butter
The BIG olive oil (and we ran out)
2 cases of potato chips

On the way home up I-29 to Brookings, I grabbed this photo from the car. A picture perfect South Dakota day.
Posted by Kate T at 10:53 AM No comments: